Rumors of a Kriti Sanon and Prabhas wedding are fake

On November 29th, Kriti commented on her Instagram account that “Our Bhediya simply overreached on a reality show; it’s neither pyaar (love), not PR. His humorous banter also gave rise to several howl-arious rumours.” 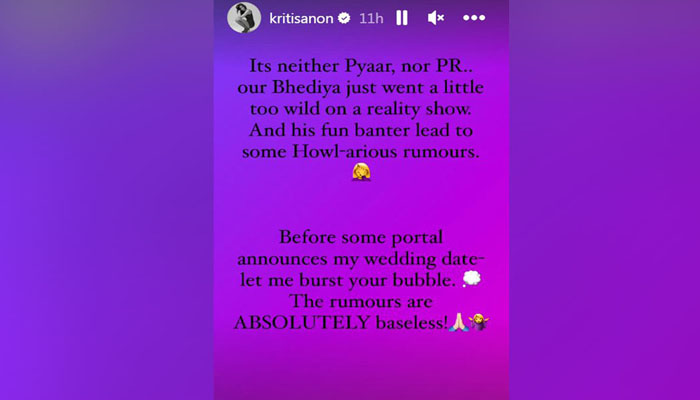 Before some gateway discloses the day of my wedding, let me blow your bubble, she continued. The rumours are ENTIRELY untrue!”

Kriti and Varun recently made an appearance on the reality dance competition Jhalak Dikhla Ja 10 to promote their movie Bhediya.

Varun made a suggestion that Kriti and Prabhas are having a hidden connection while speaking with director Karan Johar in the television programme.

Kartik and Varun Dhawan most recently appeared in Bhediya. The movie came out on November 30.

Maryam Nawaz arrives in Lahore to “reorganise” the PML-N

Maryam Nawaz, senior vice president of the Pakistan Muslim League-Nawaz (PML-N), has finally arrived in Lahore with the mission to...

Maryam Nawaz will be welcomed by the PML-N

Fawad’s judicial remand in sedition case is being challenged in Islamabad court , and decision is pending