Cavani’s a shrewd signing, toothless Arsenal can forget top-six if they can’t be ruthless and Son Heung-min NEEDS partner-in-crime Kane… THINGS WE LEARNED from the Premier League weekend

by Daily Patriot
in Sports
0

Come the end of the season, last weekend could well be looked back on as the defining one in the Premier League at both ends of the table.

With Manchester United being dealt a sucker punch by Everton, Manchester City took full advantage to stretch clear at the top as they piled more misery on Liverpool to all but end their title hopes.

If the weekend didn’t belong to Pep Guardiola, then certainly the teams hoovering above the relegation zone would have a good case.

Every team outside the bottom three up to 14th picked up points while Sheffield United and West Brom both lost and Fulham failed to win at home, leaving an eight-point buffer between Burnley in 17th and the final relegation spot.

It was another weekend to forget for Arsenal as their alarming drop in form continued while Jose Mourinho’s Tottenham finally ended their losing streak after Harry Kane’s return inspired victory over West Brom.

Here, Sportsmail take a closer looks at last weekend’s results and pick out 10 things we learned.

Batman is not Batman without Robin and there is no Morecambe and Wise without Eric and Ernie.

Like all great double acts, Son Heung-Min is not the same dangerous attacking threat when Harry Kane is not in the team.

He is blunted without his partner in crime. In their 20 league games together this season, Son has scored 13 times and registered six assists. In the two games he’s played without Kane in the Premier League this season, he hasn’t scored or assisted.

But as it showed on Sunday, when Kane is playing, it lifts Son. They both scored in the second half to earn victory for Tottenham over West Brom – and Son admitted it was a big relief to have Kane back afterwards.

‘Harry Kane is so, so important for us,’ the South Korea international said. ‘He is one of the best strikers in the world. It was only a couple of games but we missed him a lot. Him coming back and scoring straight away, it’s what we needed. I missed him.’

When Manchester United had agreed to pay a 33-year-old striker £9million a year, it invariably sent eyes rolling and stoked up more feelings of scepticism and despair.

It was further proof that United were a club with no clear transfer strategy or idea of what they were trying to achieve.

But Edinson Cavani has proven to be a revelation and put forward a good argument that he is deserving of being the club’s starting striker.

The forward showed how effective he can still be at the top level over the weekend by scoring United’s first goal against Everton – his sixth league goal of the season.

He has also registered the best goals-per-minute ratio and big-chance conversion rate of all of United’s strikers this term. And will undoubtedly make further contributions as we approach the business end of the season.

There was some method to the madness after all then. 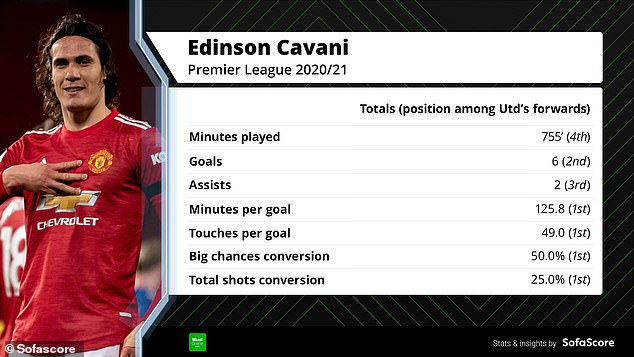 Manchester City could win the lot this season

There’s no better team in the land than Manchester City right now.

They’re already in the Carabao Cup final and will be nailed-on favourites to defeat Tottenham to win the competition, which has more or less become a formality for them each season.

They are only three games away from the FA Cup final and Championship side Swansea are next up and the Premier League is now there’s to lose after thrashing Liverpool 4-1 on Sunday, even with the significant absences of Sergio Aguero and Kevin De Bruyne.

No one looks capable of beating Pep Guardiola’s men at the minute, and they will no doubt fancy their chances of winning the domestic treble this season.

As for the Champions League, we all know City’s past in this competition but confidence is sky high and this looks like the best chance of any season to finally end that curse.

Exploding in the police line is like challenging the security agencies: SK Niazi

Security of the province will have to be reviewed: Abdullah Gul, This is the headquarters; the entire province is run...

On Fawad Chaudhry’s bail request, court will hear from all parties tomorrow

Maria Wasti Talks About Her Viral Pictures That Were Leaked